They Got Lincoln -- Again and Again 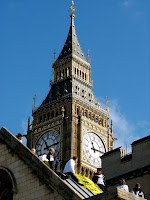 So me and the missus are standing across from Parliament Square, trying to figure out how 40 Greenpeace folks ended up on the roof ruining the pictures of Big Ben with banners protesting the abuse of the environment, when she nudges me and points to a statue over on Parliament Street.

And I take a picture, one of the dozens of pictures I took of the statues and memorials that occupy every bit of free space in London.

We’re proud of our sculpture in Chicago. Heck, we’ve got Calders, a Miro, a Picasso, a few Henry Moores, even an entire auto junkyard that Frank Stella piled up inside the Metcalfe Federal Building on Jackson. But here in the Windy City our sculptures are like super-heated molecules moving quickly away from one another.

Sculpture-wise London is the equivalent of a substance cooled to near absolute-zero. Works aren’t just plopped into parks and plazas . . . in many places they step over the curb and stand in the middle of the street.

Anyway, it turns out that she who is wiser than I was right and that the Parliament Street statue really WAS Abraham Lincoln. 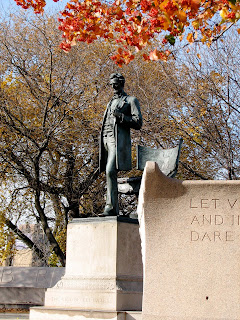 That London Lincoln – the throne-like chair, the standing President, his head bowed, a farm-boy’s oversized hand grasping the iron lapel of his frock coat – is familiar to every Chicagoan. It’s a replica of Augustus Saint-Gaudens sculpture that stands at the north end of Dearborn in Lincoln Park, the work we call The Standing Lincoln.

Saint-Gaudens had at the age of 17 seen Lincoln’s train as it moved toward the President’s inauguration. After schooling, including studies at the Ecole des Beaux-Arts in Paris and a time in Rome, he received his first major commission in 1876 for a sculpture of Admiral David Farragut that still stands in New York City’s Madison Square Park.

Five years later Chicago lumber baron Eli Bates died and in his will left the city enough money to cover two projects, a fountain and a statue of Abraham Lincoln, each to be located in Lincoln Park. Saint-Gaudens was chosen for both projects. The fountain, Storks at Play, is located to the south of the Lincoln Park Conservatory.

It took several years for the sculptor to form his vision of the fallen president into its final form. Using his boyhood impression of Lincoln as he viewed him on that inaugural train, standing “tall in the carriage, his dark uncovered head bent in contemplative acknowledgement of the waiting people,” (www.sgnhs.org) along with the life mask of Lincoln and the casts of his hands made by Leonard Volk before the President was elected, Saint-Gaudens began work.

He used a six-foot, four-inch Vermont farmer, Langdon Morse, as his model, beginning at Cornish, New Hampshire, in the summer of 1885. (www.waymarking.com) 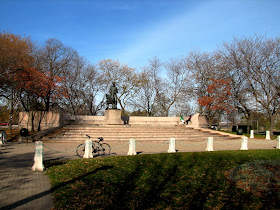 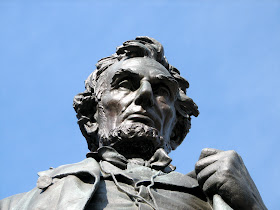 The pedestal on which the Lincoln Park sculpture is mounted was the design of Stanford White, who began his career as the principal assistant to the foremost architect of the day, Henry Hobson Richardson, and who was a partner in the most prestigious architectural firm in New York City, McKim, Mead and White.

Sharing the fate of Lincoln, in June of 1906 White was shot three times in the head at point blank range by multi-millionaire Henry Kendall Thaw on the Madison Square Roof Garden. From that roof it is certain that he could have seen the Admiral Farragut statue, another Saint-Gaudens work for which White designed the pedestal. 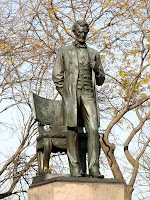 The Standing Lincoln was unveiled on October 22, 1887. Chicago Mayor E. A. Roche headed the dignitaries on the dais, and Abraham Lincoln II, the 15-year-old grandson of the late president, released the flag covering the statue. (www.lib.niu.edu) And in that place at the head of Dearborn Parkway Saint-Gaudens work has stood ever since.

As hundreds of thousands of young men were dying on the western front during World War I, negotiations were being carried out for a statue of Lincoln to be erected near Parliament Square in London. The struggle between lawmakers and artists that ensued makes for a fascinating story. Read about it in the next installment of They Got Lincoln – Again and Again.
Chicago Old and New at 1:57 PM No comments:
Share
‹
›
Home
View web version