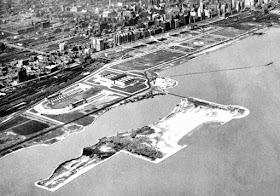 December 31, 1943 – A year ends, one that began with President Franklin Roosevelt and Prime Minister Winston Churchill meeting in Casablanca and, midway through, marks the surrender of the German army in North Africa to the British and Americans.  Even in the darkest hours of the war Chicago begins to look toward to what will come afterward.  On this day the Chicago Daily Tribune makes that clear in an editorial, stating, “If Chicago wants to avoid being by-passed by the great air transport companies of the post-war age, it will have to see that they get the terminal facilities they need.”  The editorial board sees neither airport currently in existence as practical.  The place we know today as Midway is “nine miles from the heart of the city and accessible only thru the most densely populated sections.”  Douglas Field, today’s O”Hare, “would be 19 miles from the loop.”  What is the alternative?  The editorial favors something that has been talked about for a decade or more – an airport on the city’s lakefront.  “An airport built in this area on made ground,” the editorial states, “would be free of obstacles such as usually surround municipal airports, could be readily expanded to any size needed to accommodate great, new planes, and would be only a few minutes’ drive from the heart of the city.”  The editorial continues, “The present outer breakwater runs from the vicinity of South Water street almost continuously to the Shedd aquarium at the foot of Twelfth street.  Extending land outward from this breakwater would provide ample room for an airport and would give airplanes plenty of space to gain altitude, even in a westward takeoff, before reaching tall buildings.  It would in no way interfere with navigation, and would be less than a five minute ride to the loop over a short causeway.”  The editorial even makes reference to the fact that the Wolverine and the Sable, Navy aircraft carriers steaming along the lakefront, have taken meteorological surveys of the area north of Thirty-First Street and have found that it is “usually free of smoke and has wind velocity and ceiling suitable for a large airport.”  Imagine what the city’s lakefront would look like today if the clamor for this kind of new airport had gained a large enough audience to see it actually built.  Above, the early 1940's photo of Northerly Island -- later Meigs Field and now Northerly Island again -- gives some idea of what an airport facility much larger than this would have done to the lakefront.
Chicago Old and New at 2:30 AM No comments:
Share 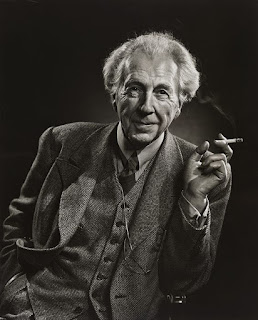 December 30, 1950 – The National Arts Foundation announces that Frank Lloyd Wright has been chosen as the contemporary artist “who would be most highly regarded in the year 2000” in a selection process in which “prominent artists, writers and musicians from 17 countries” [Chicago Daily Tribune, December 31, 1950] participated. In the same selection process Albert Schweitzer is named the “Man of the Century.”
Chicago Old and New at 2:30 AM No comments:
Share 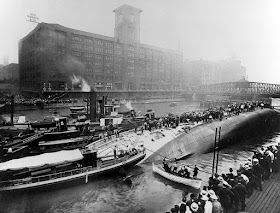 December 29, 1944 -- John H. Lescher, a Chicago police officer for 35 years, turns in his star and announces he will work his last day on January 2.  An era ends with Lescher’s retirement because he was the first officer to sound the alarm on July 24, 1915 when the Eastland turned on her side at Dearborn Street, carrying 844 passengers and crew members to their deaths.  Assigned to the central station, he spent 32 of his 35 years patrolling the Loop.  Lescher, a bachelor, was an accomplished amateur wrestler who at one time held the world welterweight championship.
Chicago Old and New at 2:30 AM No comments:
Share 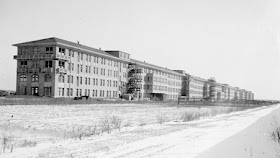 December 28, 1918 – A story that will continue for some years reaches a turning point on this date as the United States War Department passes on an opportunity to purchase the hospital that lumber dealer Edward Hines is building on the site of a former speedway near Maywood.  Secretary of War Newton Baker says, “…The war department has no right to spend money which has been appropriated to it for temporary war uses in making permanent additions to the military establishment, but that if the congress wants us to establish a permanent military hospital in Chicago the Speedway will then be considered, but that as a war emergency it obviously is not necessary.” The hospital, at this point half-finished, is surrounded by “a mushroom growth of mystery, hints of bribery, accusations and counter accusations.”  [Chicago Daily Tribune, December 29, 1918]  Among other things realtor Milan M. Hitchcock, the former postmaster of Berwyn, vanishes without a trace in mid-November after he tells his family he is headed to Chicago to discuss land values around the Speedway with a detective representing the Hines interests.  According to the paper, “It developed during the investigation of his disappearance that he had received a telegram from a war department official months before asking for a valuation on the land surrounding the Maywood speedway.  The one he made was far below the price asked by Hines for his hospital.”  In early October the War Department informed Hines that it had never formally authorized the hospital that he had begun in memory of his son, who was killed in France as World War I came to an end. At that point Hines began a lobbying effort to get the government to bend to his wishes.  The lumber dealer apparently engaged in an extensive campaign against the hospital complex being completed at Ft. Sheridan, railing against the lack of safety in the wooden buildings of that facility, touting the fireproof construction of his own.  Influential Chicagoans by the thousands received circulars deriding the Fort Sheridan complex.  Ads were placed in newspapers carrying that message to a wide audience.  The story didn’t end there; plenty more was to come before the United States Senate voted in 1920 to appropriate 3.2 million dollars to assume ownership of the hospital, provided Hines kicked in $1.6 million.  Construction began again in spring of 1920, and the first patient was admitted to the new facility on August 8, 1921.  The above photo shows the hospital as it waited for someone to make a decision about what would happen to it.
Chicago Old and New at 2:30 AM 1 comment:
Share 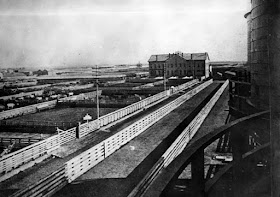 December 27, 1865 – The first shipment of hogs arrives at the Union Stockyards, opened officially just two days earlier.  The vast facility that would come to occupy land bordered by Pershing Avenue, Halsted Street, Forty-Seventh Street, and Ashland Avenue, got its start in 1864 when nine railroad companies purchased 320 acres of swampland on the southwest side of the city.  [www.chicagohs.org]   Fifteen miles of railroad track brought the critters to the stockyards, and 500,000 gallons of water from the river were pumped into the yards each day, with waste water dumped into a channel flowing back into the river, that channel now known as “Bubbly Creek”.  From the 320 acres in 1865 the stockyards grew to 475 acres by 1900 and contained 50 miles of roads with 130 miles of railroad track at its perimeter. 16 million animals a year were processed in the stockyards during the peak years of World War I, an average of nine million pounds of meat every single day.  The above photo shows the Union Stockyards in 1867.
Chicago Old and New at 6:24 PM No comments:
Share
‹
›
Home
View web version