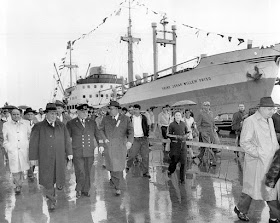 April 30, 1959 – At 10:30 a.m. the Dutch freighter Prins Johan Willem Friso, slides into a berth at Navy Pier and becomes the first ship to travel through the new St. Lawrence Seaway to Chicago.  Forty American Indians ride a tugboat out to the ship and accompany it back to the dock where Mayor Richard J. Daley and the Fifth Army band greet the ship and its captain, Sander Klein.  From the dock the mayor escorts Klein to Michigan and Ohio Streets where a parade kicks off, heading down Michigan to the Blackstone Hotel for a reception at which the captain is made an honorary citizen of Chicago.  A small amount of the ship’s cargo is offloaded from at the pier, but the bulk of the freight will be taken off in Calumet Harbor where the ship will receive a cargo of industrial and agricultural products bound for European ports. 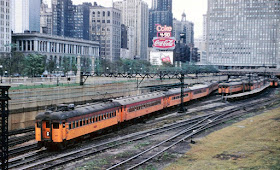 April 30, 1903 -- A new tactic is used in an effort to appropriate land in Grant Park and use it for the construction of public buildings. The Illinois House of Representatives votes on a Senate bill to provide a site for the privately-funded Crerar Library, a legacy of Chicago businessman John Chippewa Crerar who left $2.6 million as an endowment for a free public library. The bill will empower park commissioners to authorize the construction of a free public library building on a site of their choosing, provided district tax payers approve the plan in a municipal election. The Chicago Daily Tribune editorializes, "There is land east of Michigan avenue where a site is available on which the trustees of the Crerar library will erect a handsome building if given an opportunity to do so. The land cannot be put to a better use. The house should give them an opportunity by concurring in the senate bill it is to vote on today." Although the legislation passed, the referendum never made it to the voters. The battle over the library, led by merchant A. Montgomery Ward for much of the rest of the decade, continued all the way to May of 1912 when the library trustees admitted defeat and announced their intention to purchase the land at Randolph and Michigan for the building. That building, designed by Holabird & Roche was delayed by the outbreak of World War I and finally finished in 1919. By the 1950's the building could no longer support all of the library's holdings, and the institution affiliated itself first with the Illinois Institute of Technology and then with the University of Chicago, where the current library, designed by Stubbins Associates, was completed in 1984. The late 1950's photo above shows the 1919 library across Randolph Street from what is now the Chicago Cultural Center and across Michigan Avenue from the Coca Cola sign. 150 North Michigan Avenue occupies this location today.  That is the A. Epstein & Son's design with the diamond top, pictured below. 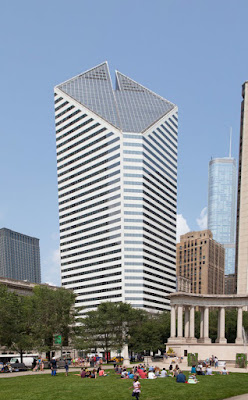 Chicago Old and New at 2:30 AM No comments:
Share 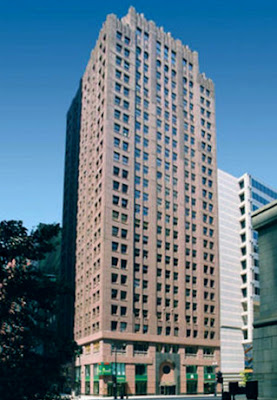 April 29, 1928 – The Chicago Daily Tribune reports that the Gage Structural Steel Company, with offices at 3123-41 South Hoyne Avenue, has set a record for placement of steel in a tall building.  According to R. H. Gage, vice-president and engineer of the company, a record of 36 working days was established in the steelwork of the 100 North La Salle building. Gage says, “The first delivery of structural steel was made on Feb. 24, 1928, and the final delivery on April 13, 1928, and the erection of same was completed shortly thereafter in the record time of seven weeks, or thirty-six working days.  Three days were deducted for inclement weather, when the steel erectors could not work, and Saturdays were figured as half days, owing to the fact that the steel erectors quit at noon.”  [Chicago Daily Tribune, April 29, 1928] The 25-story building at the corner of La Salle Street and Washington required 1,958 tons of structural steel. 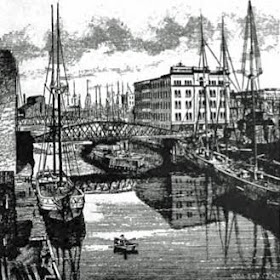 April 29, 1862 -- Report in the Chicago DailyTribune for this date: "A drunken man named Gates, who resides on Wells street, became suddenly sobered Saturday night, as follows: He was walking along the river dock between Randolph and Lake streets, when, by some means unexplained, he got into deep water. He howled lustily for help, and was rescued by two men, just as he was sinking for the last time. Never was a pickled article more suddenly or completely freshened than was Gates. He was taken in charge by the police and furnished with lodgings in the Hotel de Turtle, West Market station." Poor pickled Gates nearly met his doom just beyond the nearest bridge at Randolph Street, pictured above.
Chicago Old and New at 2:30 AM No comments:
Share 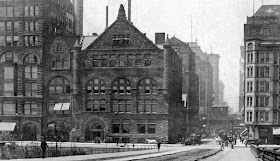 April 28, 1893 – The Chicago Club moves into “new and commodious quarters” [Chicago Daily Tribune, April 29, 1893] in the structure that formerly held the Art Institute of Chicago before the museum’s move to its new building on the lakefront.  Designed by John Root, the headquarters for the Chicago Club, at the corner of Michigan Avenue and Van Buren Street, “meets the taste of the critic in its plain yet rich proportions.”  Francis M. Whitehouse is the architect charged with renovating the building to make it suitable for the wealthiest private club in the city.  The first story wall was lowered to make the ceilings of the entry level appropriate for the use of club members and “By this arrangement an extensive and finely proportioned hall was secured two and one-half feet below the level of the reading room.  A flight of marble steps leads up to the latter room.”  Servants’ room and a laundry are contained in an addition that has been built over the former courtyard of the Art Institute.  The club’s new headquarters will also have its own ice plant and electricity generating plant.  The elegant building would remain the Chicago Club’s headquarters until 1929 when it collapsed while being remodeled. 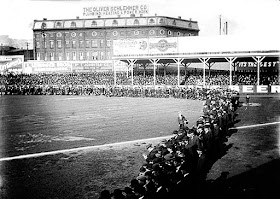 April 28, 1909 -- The Cubs come back in the ninth inning to beat Cincinnati in a squeaker, 6-5. Another sports reporting gem, this one by I. E. Sunburn in the Chicago Daily Tribune. "Meek as so many cosset lambs during the early innings of today's game," he writes, "Chance's [player-manager Frank Chance] men suddenly tore off their disguises, converted themselves into ravenous wolves, snatched away from the Reds the victory which was apparently clinched, and plunged a stiletto deep into the vitals of Clark Griffith [Cincinnati's manager]." Reds pitcher Bob Ewing is in command until the seventh inning when he allows two runs, but the Wrigley nine was still down by three going into the top of the ninth. Chance led off the final frame with a single to right. Third baseman Harry Steinfeldt "poled a long fly" to left, but shortstop Joe Tinker "smashed one so hot that [Red shortstop Mike] Mowrey had no chance of stopping it. Outfielder "Circus Solly" Hofman laces a line drive into center. Chance scores, and "only two runs were needed to tie her up." Cubs second baseman Heinie Zimmerman pulls a line drive between short and second and Reds left fielder Dode Paskert, hustling to cut down a run at the plate "fumbled the ball in his eagerness and it bounded gleefully back toward the fence." Tinker and Hofman score and Zimmerman "sneaked around to third a toenail ahead of Paskert's throw in." Cubs catcher Pat Moran hits a bounder to Reds second baseman Miller Huggins, who makes "a fine shot to the plate to nil Zim's run," but Cincinnati catcher Frank Roth drops the ball. That is all that is needed to seal "the grandest rally that has been pulled off this season in any section of the map." The game is played at Cincinnati's Palace of the Fans, pictured above.
Chicago Old and New at 2:30 AM No comments:
Share
‹
›
Home
View web version