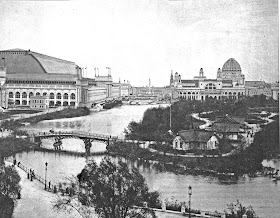 March 31, 1893 – The Japanese flag is raised at noon on the Wooded Island in Jackson Park, and dedication ceremonies begin at the Hooden or sacred palace that will be the Japanese exhibit at the World’s Columbian Exposition.  Nearly every fair official is present, along with a number of businessmen and leading members of the Japanese community in the city.  The 300 or so guests in attendance are allowed to inspect the temple for a short time before the ceremonies begin.  The architect of the three buildings that make up the exhibit, M. Kuru, explains the plan to begin the festivities, saying “… the three buildings here reproduced represent the styles of architecture which were in vogue from the tenth century to the eighteenth.  Although each of these three epochs has an architectural style distinctive of its own and reproduced here with absolute accuracy they are planned under a general architectural design.  The whole plan is taken from the Hoodo, which is now existing in Uji, Japan.” [Chicago Daily Tribune, April 1,1893] The first portion of the ceremony ends with a note of gratitude to the 24 Japanese laborers who constructed the exhibit.  They respond “in a peculiar manner and clapping their hands.”  Then George R. Davis, the Secretary General of the Fair, rises to speak, constructing his own edifice of over-the-top prose.  “In all time past,” he says, “in all time to come, no celebration of the accomplishments of man, has or will, in my opinion, equal the untold splendor of the Columbian Exposition … to no people of the earth does the Columbian Exposition offer grander or more distinguished advantages and opportunities than to our antipodean friends.  Japan stands in the foreground as a wonderful example of the swift progress of modern development and education.  Japan, in the full consciousness of its wealth and power, realizing to the fullest extent the advantages to be secured, has been prompt and generous in support of the Exposition.  I am glad that I may in this public manner give expression to our satisfaction with the result you have accomplished and the zeal which you and your colaborers have shown in your work through the last winter.”  Potter Palmer and Daniel Burnham also deliver addresses after which the President of the South Park Commissioners, Joseph Donnersberger, discloses that at the conclusion of the fair only two buildings are to remain in Jackson Park – the Japanese pavilion and the Life-Saving Station.  “One was for art,” he says, “the other for utility.”  After the ceremony wraps up the assembled dignitaries retire to the Manufactures Building, where a luncheon is served.  In its appraisal of the exhibit the Chicago Daily Tribune reports, “In the government exhibit will be shown many rare and valuable relics and curiosities.  Many of these belong to the Emperor … The work of the interior decoration was placed in the hands of the Tokyo Art Academy … the material used in the construction is unpainted wood and the spectator is filled with admiration for the many ingenious and effective ways in which these people employ their raw material, their methods of getting the best effects from the natural colors of wood, and the exquisite polish they manage to put upon it.”  The Wooded Island and the Japanese exhibit can be seen in the lower right corner of the above photo.  Off the photo to the left is the building that would become today's Museum of Science and Industry. 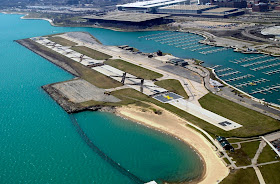 March 31, 2003 – Under cover of darkness trucks carrying construction equipment move onto Meigs Field and shortly after midnight bulldozers begin to dig six huge “X” marks into the airstrip, stranding 16 privately owned aircraft on the tarmac of an airport that will never function again.  Mike Daffenberg, an air traffic controller at the airport, says he found out he was out of a job on his way to the airport from DeKalb for his 6:00 a.m. shift.  “I felt I was laid off by the radio this morning,” he said.  [Chicago Tribune, April 1, 2003] Mayor Richard M. Daley is unapologetic, and the Tribune observes, “Still stewing because federal authorities were quicker to restrict airspace over Mickey and Minnie at Disney World and Disneyland than they were for Chicago, Daley said his unilateral closure of Meigs was prompted in part by fears that the nation’s homeland security bureaucracy was moving too slowly to address the city’s needs.”  A spokesman for the Aircraft Pilots and Owners Association, Warren Morningstar, says, “We have our version of shock and awe right tin downtown Chicago.  What we really are upset about is that the mayor has no honor, and his word has no value.” 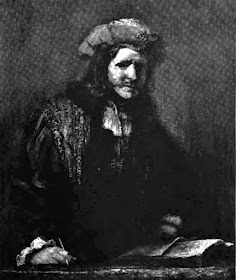 March 31, 1890 -- The Chicago Daily Tribune reports that "The Accountant," a painting by Rembrandt van Rijn, will remain in Chicago on display at the Art Institute. The treasure comes by way of Chicago oil man P. C. Hanford, who purchased the painting, valued at the time at $60,000. "I did not want to see it go away from Chicago," said Hanford. "I was waiting for some of our rich people to buy it -- one of the men who could spend the money and not feel it. I am not rich, but I love art. I waited till the last moment. We are going to have a World's Fair here and anything that we can get hold of in the way of art we ought to keep here." [Chicago Daily Tribune, March 31, 1890] You won't find the painting at the Art Institute today. Mr. Hanford sold the work on January 31, 1902 for £4,600 or a little over $22,000.
Chicago Old and New at 2:30 AM No comments:
Share 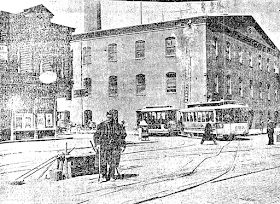 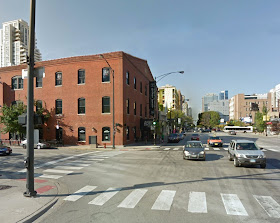 March 30, 1902 – The Chicago Daily Tribune runs a feature on two men, Charles Erickson and John Axelson, who are responsible for switching 3,222 streetcars each day, “the hundreds of cable trains that crawl out of the La Salle street tunnel every day and follow one another in rapid succession into different sections of the North Side traversed by the cable system.” [Chicago Daily Tribune, March 1902] Each man works nine hours on a job that “must be done no matter what the condition of the weather may be, and it must be done without the protection of shelter of any sort.  In winter and summer, when it is cold and when it is hot, when it rains and when the sun shines ….” The job entails making certain that cars running in Wells Street and Clark Street get around the curve at LaSalle Street and Illinois Street.  The key to the operation is the mouth of the LaSalle Street tunnel where as soon as the switchman “sees the sign on the top he knows how to set his switches.”  There is virtually no time during the nine-hour shift when a train is not rounding the curve.  Erickson says, “It’s not such hard work, but you have to keep your eyes open and your hands busy.  In winter it is harder than in summer, because the switches freeze and cannot be handled so easily as in warm weather … The first car from the barns in the morning reaches the curve at 5:45 o’clock, and the last one at night passes here at 12;50.  Between those hours there is scarcely a minute that the man on duty is not busy with the switch.”  The first cable car in the city ran at 2:30 p.m. on January 28, 1882, and the last one arrived at the Twenty-First Street powerhouse on October 21, 1906.  At the turn of the century Chicago had the second largest cable car system of any city in the nation, which would morph into the largest streetcar system in the world in the ensuing decades.  Note that the building behind the switchman in the 1902 Tribune feature still stands today at 500 North LaSalle Street.  It is the old powerhouse for the LaSalle Street cable cars.

March 30, 1853 – The Chicago Daily Tribune reports on a court case that will continue to have an impact on the city for well over a century.  The case involves a suit which James H. Collins files against the Illinois Central Railroad Company, in which Collins attempts to enjoin the railroad from running its tracks “in the lake at some distance from the shore.” [Chicago Daily Tribune, March 30, 1853] The nut of the case is that the railroad, by constructing tracks off shore, will impact the value of privately held property along the lake.  The attorney for Collins, John M. Wilson, argues that “the State has the right to use the waters of the Lake for all public purposes,” but that “the State cannot give the company this power.”  The attorney for the railroad argues that “the Legislature of the State of Illinois has passed a law giving to the Illinois Central Railroad Company so much of the lands belonging to the State as they may pass through and as may be necessary for the laying of the track and the construction of depots.”  As the day drags on, a lawyer for Collins says, “It is a conceded point, that if the complainants are the owners of property where the Company proposes to locate their road, that property cannot be taken, except by legal measures, and not then unless due compensation is made … This Company seeks with the strong arm of power to take this property and these advantages, without compensating the owners … There is no authority to sustain the position that one owning land upon a body of water can be cut off from the water and its attendant advantages, without compensation.” In a January, 1951 article the Chicago Tribune made an interesting point about the transaction that came following the Collins vs. I.C. case, “The Illinois Central did not ask for its lake front tracksite.  That was assigned to it by the city.  The lake at that time came right up to Michigan av.  I. C. historians assert the city decided it would be a nice thing to have a railroad between itself and the open lake, and stuck the Illinois Central out there for protection.”  In any event, the railroad got the land, built a trestle, and occupied prime lakefront real estate for a century or more, sparring with the city over its position on lakefront land for most of that time.  The above photo shows the train that carried the body of Abraham Lincoln to the city as it moves along the lakefront trestle in 1865. 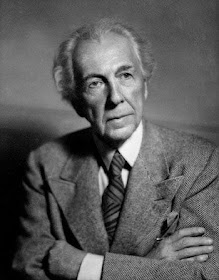 March 30, 1945 -- Frank Lloyd Wright addresses the Chicago Chapter of the American Institute of Architects at the Casino Club. He talks at length about "the philosophy of organic architecture" [Chicago Daily Tribune, March 31, 1945] and makes this observation when asked about the future of cities, "Cities are just as dated as static and the radio. Americans just want to live. Cities are not important. The reality of buildings consists of space within -- to live in. The old period of putting the outside in -- is gone." The photo above was taken in 1945, the year of the Casino Club address.

Chicago Old and New at 2:30 AM No comments:
Share
‹
›
Home
View web version