October 30, 1966 – An Italian Renaissance painting, “Madonna, Child, and St. John,” by the Italian painter Correggio is recovered from a Grant Park garbage can 17 hours after it is reported stolen from the Art Institute of Chicago.  The painting, valued at a half-million dollars, is recovered from a trash can along Roosevelt Road between Columbus and Lake Shore Drive.  An anonymous phone call alerts authorities to the location where they find the painting wrapped in brown paper and tied up with string.  The caller says, “It started as a prank, but it got out of hand.”  [Chicago Tribune, October 31, 1966]  The director of the Art Institute, Charles C. Cunningham, examines the work at police headquarters and identifies a split in the wood on which the painting was done and some scuff marks on the neck of the Madonna.  Cunningham states that the security system in the Art Institute will be “definitely changed.”  Officials are at a loss to explain how a valuable work of art could be removed from a second-floor gallery and moved through a system of electric eyes and alarms.  The burglar apparently tore the painting and the frame from the wall and ran through ten galleries to a window at the southeast corner of the building.  Using a hammer, the thief pried a screen loose, broke a window and jumped to a ventilator on the roof a building ten feet below.  From there he jumped to a parking lot, dropping a large part of the frame in the process.  The broken window set off a burglar alarm at approximately 1:00 a.m.  The call concerning the location of the painting comes from “somewhere on the southside” at about 6:00 p.m. in the late afternoon.  According to Cunningham, the thief must have been an expert.  He says, “The thief apparently was interested only in this particular painting and it appears he was familiar with the museum and knew exactly where to go.”  The Tribune graphic shows the route of the thief as he escaped with the painting. 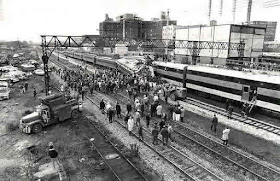 October 30, 1972 – The worst accident in Chicago transit history occurs as 45 people die and more than 350 are injured when a six-car commuter train slams into the rear of a four-car commuter train that is backing up to a station platform at Twenty-Seventh Street after overshooting it.  President Richard Nixon sends the Secretary of Transportation, John Volpe, to the scene and the National Safety and Transportation Board begins an investigation. It takes six hours for 240 fire fighters to remove the dead and injured from the two trains at a site just two blocks away from the emergency room of Michael Reese Hospital, which has doctors on the scene within minutes.  There are nearly a thousand passengers on the two trains as they collide at 7:27 a.m. at the height of rush hour.  Most of the deaths occur on the rear car of the lead train, which is composed of new “high-liner” double deck passenger cars.  The following train, composed of older single-level steel coaches, plows into the reversing train, over-riding the underframe of its last car and telescoping it.  The official report of the N.T.S.B. finds “that the probable cause of this accident was the reverse movement of train 416 (the lead train) without flag protection into a previously vacated signal block and the failure of the engineer of train 720 (the following train), while operating faster than the prescribed speed, to perceive the train ahead in time to avoid the collision.” 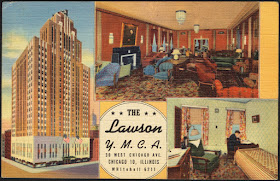 October 30, 1931 – The largest Y. M. C. A. in the world is officially opened at dedication ceremonies on this date in 1931.  The new Lawson Y. M. C. A. on the northeast corner of Chicago Avenue and Dearborn Streets rises 24 stories and is built at a cost of $2,754,000.  The new building is named after Victor F. Lawson, the late publisher of the Chicago Daily News, who left $1,500,000 to start the project. There will be 650 residential rooms with 700 telephones, and each room in the building will have a radio speaker that allows a choice of five programs.  As described by the Chicago Daily Tribune, facilities include “a small chapel for private meditation and group worship; a completely equipped ‘log cabin,’ with an artificial woodland view out the window; a room of 1950, done in an ultra-modernistic style; the Lawson Memorial library; a boxing room with permanent ring; two large gymnasiums; volleyball and handball rooms; locker rooms with accommodations for 2,500 men; a rifle range; 10 studios for hobbies, handicraft, and music; mechanical exercise room; a swimming pool, 62 x 25 feet, with a 12 foot depth in the middle for diving; restaurants, grills and cafeterias, and fountain rooms.  There is also a roof garden on the nineteenth floor” [Chicago Daily Tribune, October 25, 1931] In May of 2017 developer Peter Holsten, who paid one dollar for the building with the caveat that it provide affordable housing for at least 50 years, announced a $100 million plan to convert 583 units into 400 larger units with private bathrooms and kitchens.  The plan also will replace exterior fire escapes with two enclosed stair towers and install a new bank of modern elevators. 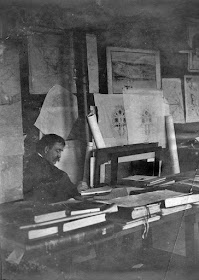 October 30, 1907 – Wouldn’t it have been interesting to be serving the coffee on this day as Mayor Fred Busse, First Ward aldermen Michael Kenna and John Coughlin and a committee from the Commercial Club meet in architect Daniel Burnham’s office atop the Railway Exchange Building on Michigan Avenue.  Two days earlier the city council had passed an ordinance directing the commissioner of public works to gather plans for connecting Beaubein Court on the south side of the river with Pine Street on the north.  The meeting in Burnham’s office is one more step in a process of trying to unite the north and south side boulevard systems that has been dragging on for over 15 years.  After the meeting Clyde M. Carr, chairman of the Commercial Club committee, says, “We have acted and will continue to act as a clearing house for ideas on this subject.  We have not given our support to any one plan, but are anxious to push the first worthy plan that the authorities may decide upon as feasible.  What we are striving to keep in mind is the future – something that will give glory to Chicago for a hundred years to come.  We do not want a makeshift or a compromise.”  [Chicago Daily Tribune, October 31, 1907] It will be another 13 years before the lawsuits are settled, the property acquired, and the great bridge leading Michigan Avenue across the river completed.  Daniel Burnham is pictured above in his office atop the Railway Exchange Building.