Look through Any Window

Hitchcock's Vertigo . . . now there's a thriller for you.  People falling all over the place, right from the first two minutes of the film when Scottie Ferguson hangs to the sagging gutter for dear life while the poor copper reaching out to help him falls to his death.  Vertigo!  Scottie retires from the force and never gets a minute of peace as he dreams of falling while generally falling to pieces.

Until the end of the movie when he gets himself together while the femme fatale gets it.

Watch the movie once all the way through and you'll think twice about stepping out onto that one-and-a-half inch glass ledge that hangs from the Willis Tower's observation deck.

Ever have one of those dreams about falling?  Not good.  The experts say that such dreams indicate a loss of emotional equilibrium or self-control, a fear of "letting go" in real life.

Good news, though, it's a myth that if you hit the ground before you wake up, you're dead.

Of course, you knew that already because you're still alive and the forsythia are in bloom and Sarah Palin's $75,000 contract to speak at Cal State somehow ended up suspiciously in a dumpster and controversy and the sweet floral smell of spring are in the air. 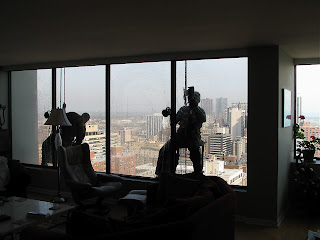 So, this falling thing.  Imagine getting up every morning of your working life and falling off a building to make a living. That's what the window washers of Chicago do for $40,000 to $60,000 bucks a year.

I thought of that this morning as the ropes appeared outside our 31st floor window while I was working my Sudoku.   Twenty minutes or so after the ropes came down, the actual human beings levitated themselves for a half-minute or so, brandishing long brushes and squeegees, and then were gone.  It's an amazing process to watch. 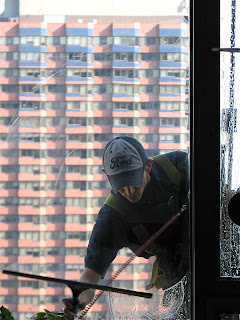 20 feet of windows in less than 45 seconds

The business was dominated in the olden days by the Poles.  Now about 95% of the 250 union window washers in the city are Hispanic.

And that fact began, apparently, with one single immigrant.  According to the Chicago Tribune (July 4, 2007), Refugio Ramirez, who came to Chicago from Garcia de la Cadena in Mexico, was working as a dishwasher at the Congress Plaza Hotel, down on Michigan and Congress, when he joined a crew at the last minute to wash hotel windows 14 stories up.

That was 40 years ago.  Ramirez soon helped a few of his cousins and all three of his sons get jobs on the windows.  Today the largest union window washing company in Chicago, Corporate Cleaning Services, says that about 80 percent of its 66 workers come from Garcia de la Cadena, a sleepy little town of about 600 souls. [www.themonitor.com] 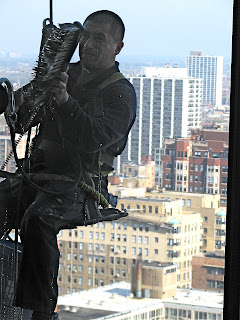 It's a job almost none of the rest of us would consider.  It's hard work even if you overlook the fact that you're hanging by a couple of ropes 50 or 70  stories up in the air.  The wind blows fiercely around tall buildings, and when the weather is bad enough to keep the rest of us indoors, the window washers are out there.

But it's a ticket to a better life.  It's a way to help the folks back home.  And it's a way to make dreams come true, to do what we have always valued in this country of freedom and opportunity -- to work hard and make your own way . . . to open a window on the future -- a cleaner window on a brighter future. 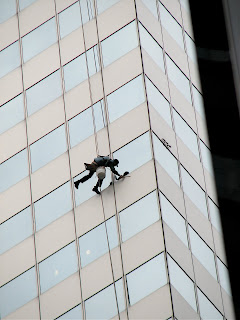 Window washer at work in the Loop 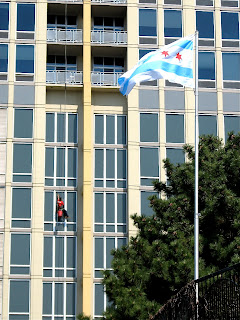 Window washer at River Place on the Park,
Erie Street at the Chicago River 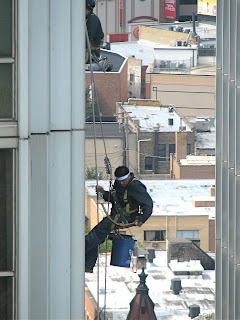 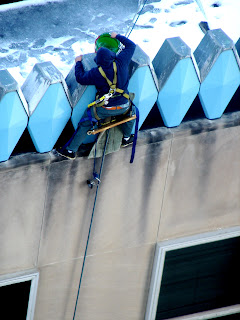 Going over the top at St. Joseph's Hospital
in really cold weather
Chicago Old and New at 7:14 PM
Share