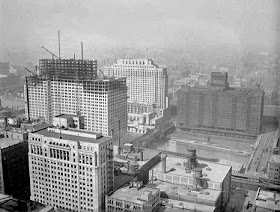 November 4, 1929 – The Chicago Opera Company, eight years old, takes up residence in its new home on Wacker Drive.  On the bill for opening night is Aida with Rosa Raisa in the title role.  There is little fanfare involved in the dedication of the new house although the lights are brought up before the performance begins and the 3,471 people in attendance as The Star Spangled Banner is played.  The crowd begins to arrive over an hour before the opera begins, and in the foyer Samuel Insull greets each person.  He is “the man without whose planning and ciphering and propagandizing and dragooning and bludgeoning the dream of civic opera on a solid foundation of Bedford stone never would have come true.”  [Chicago Daily tribune, November 5, 1929]  Insull is undoubtedly smiling as subscription sales of seats in the opera’s new quarters have already exceeded sales of seats in its former home in the Auditorium Theater by more than a quarter million dollars.  The speedy construction of the building really is a marvel as old buildings stood, waiting to be razed, on the site in February of 1928, and in June of that year the Chicago Civic Opera Company gave a concert in the excavation that had been dug for the building.  It is a joyous evening, perhaps one of the last joyous evenings for many of those in attendance as just six days earlier panicked sellers traded nearly 16 million shares on the New York Stock Exchange, starting a string of bad news that would last for another 15 years.  But all was joyous on this night as the paper reported, “The memory of the night will abide.  It will linger upon many a radiant detail, but in the long recollection it will center upon that foyer where the leaders of a great commercial capital met to survey their task, and looking up at the columns of gray travertine and the grills of golden bronze and the panels of rose and gold, found that art for art’s sake was a master worth working for.”  The above photo shows the Civic Opera Building under construction in late spring of 1929.
Chicago Old and New at 2:30 AM
Share