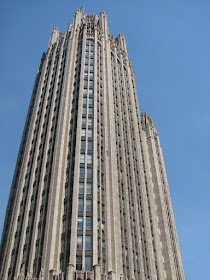 December 3, 1922 – John Mead Howells, the winner of the $100,000 competition for the Chicago Tribune’s new building on Michigan Avenue, is honored at a dinner at which he gives the keynote address.  Expressing his appreciation for the commission, Howells says, “When an architect has thought and studied and practiced a special subject for eighteen years, he feels that nothing so fine can come to him as an opportunity to give that subject its best expression.”  That subject, for Howells and his collaborator, Raymond Hood, has been the tall office building, a frustrating subject in most cases, the architect says, because of the location in a city such buildings must usually occupy.  “Unfortunately, almost all our efforts at design must be lost,” Howells says, “for the reason that most office buildings have a joint property line on each side, over which the building cannot project and this leaves the front an isolated strip of design with no relation to the other sides of the building.  It is like a decorated window shade pulled down from a roll twenty stories above the street.”  The only time a perfect skyscraper can be built, Howells says, is when an architect is given a site that allows all four sides of the building owned by the same owner.  “How many such opportunities are there in the world,” he asks.  “You can count them on your fingers.”  The new building in Chicago presents such an opportunity.  Howell goes on to talk about the plan for the Tribune building.  The intent is not to design a building that “looked Gothic … but it is meant to be a design expressing to the limit our American steel cage construction, and nothing else … I believe that the type of design chosen by The Tribune expresses not only the American office building but the actual steel cage, with its vertical steel columns from top to bottom and its interpolated steel beams.  When you have done this you have produced something Gothic in line, because the Gothic architecture was also one of structural expression.”  Closing his remarks, Howells says, “In the present design Mr. Hood and I have tried to set aside any itching for the original for fear of the fantastic, and we have striven only for a straight solution of that most worth while in American problems – the American skyscraper.” 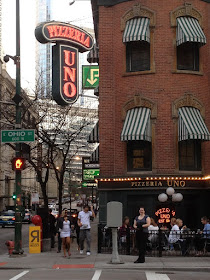 December 3, 1948 – Pizzeria Uno opens for business.  According to Eater Chicago Ike Sewell worked for Fleischmann’s Distilling Corporation and his future partner, Ric Ricardo, was the owner of Riccardo’s Restaurant and Gallery at 437 North Rush Street.  The original plan was to open a Mexican Restaurant until Riccardo, an Italian by birth, tasted Mexican food for the first time.  That pointed the duo in the direction of pizza, but not just the usual thin crust of tomato sauce, cheese and toppings, but a pizza that was worthy of the city with the big shoulders.  The restaurant was originally called The Pizzeria and then Pizzeria Riccardo.  It became Pizzeria Uno when Sewell and Riccardo opened Pizzeria Due a block away in 1955.  Today there are over 130 Uno Pizzeria and Grill restaurants in 21states, Washington, D. C., South Korea, the United Arab Emirates, Honduras, Kuwait, and Saudi Arabia.
Chicago Old and New at 2:30 AM
Share