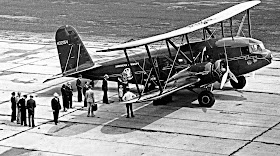 May 4, 1933 –At 1:10 p.m. an American Airways twin-engine Cutiss Condor takes off from what is now Chicago’s Midway Airport, inaugurating direct airline service between Chicago and New York City.  The plane lands at the Newark, New Jersey airport at 7:59 p.m. after a flight of five hours and 26 minutes, carrying 15 passengers, a flight attendant, two pilots and 200 pounds of express mail. Stops are made at Detroit and Buffalo.  “This is different from the old planes, when if you stood up in the aisle the pilot gave you a dirty look and began winding up his stabilizer to fix the trim of his ship,” says one passenger as he heads to the rear of the plane to watch the sun set over the Catskill Mountains.

May 4, 1945 – John Augur Holabird dies at St. Luke’s Hospital on his Fifty-Ninth birthday.  The famed architect’s résumé includes some of the greatest Chicago buildings, including the 333 North Michigan Avenue building, the Board of Trade, the Palmolive building, today’s Chicago Hilton and Towers, formerly the Stevens Hotel, Passavant Hospital, the Chicago Daily News Building, and Patton Gymnasium at Northwestern University.  The son of a pioneer in the design of steel-framed tall buildings, William Holabird, John Holabird’s education was completed at West Point.  Graduating as a Second Lieutenant, he quickly rose in the ranks to the rank of Lieutenant Colonel in the field artillery, commanding the Twelfth Field Artillery, Second Division in the St. Mihiel, Blanc Mont and Meuse-Argonne offensives.  He was awarded the Distinguished Service medal and the Croix de Guerre.  His attention turned to architecture, and he began his study in 1910, graduating in 1913 from the Ecole des Beaux Arts.  Holabird was a Fellow of the American Institute of Architects, a member of the Chicago Plan Commission and of the Commission of Fine Arts and a member of the Chicago, University, Commercial, Tavern, Union League, Glen View Golf and Saddle and Cycle Clubs. [https://www.westpointaog.org/memorials] 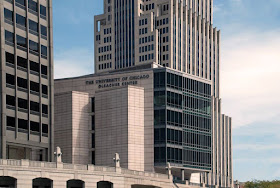 May 4, 1992 – University of Chicago trustees announce that the school has selected a site east of Michigan Avenue and north of the river, as home for its downtown Graduate School of Business. “This project reflects the university’s commitment to maintaining a substantial presence downtown, while also providing a state-of-the-art facility in which to train tomorrow’s business leaders,” says Hanna H. Gray, the U. of C. president. [Chicago Tribune, May 5, 1992] Lohan Associates, a Chicago architectural firm, will design the center, and McHugh Construction Company will be the general contractor. If you are on the river sometime, notice what an understated example the Gleacher Center is of contextual design. The tier of windows on the western third of the building’s south face relate beautifully to the Mid-Century Modern style of the 1965 structure at 401 North Michigan, Gleacher’s next door neighbor to the west. The tier of windows on the eastern two-thirds of the building relate equally well to the SOM’s 1989 Post-Modernist Art-Deco throwback NBC tower just to the east. Anyone not looking for it might well miss it, but this is contextual design that shines.
Chicago Old and New at 2:30 AM
Share