February 29, 1960 -- Plans are announced for the 36 million dollar Marina City project on the Chicago River. At 60 stories and 555 feet the two towers are projected to be the tallest housing structures in the world and the fourth tallest buildings in the city. There will be parking for 900 cars with 256 efficiency apartments, 576 one-bedroom units and 64 two-bedroom units with rents projected to start at $115. Besides the apartment towers there are to be a 10-story office building, a one-acre plaza and a theater which will seat 1,200. There is to be no mortgage on the project. Financing will take place under Title 7 of the National Housing Act, under which the government guarantees the debt assumed by the developer.
Chicago Old and New at 2:30 AM No comments:
Share

February 27, 1977 – The Chicago Tribune reports on the 35 square blocks that make up Chicago’s Loop, summarizing the results of “countless hours of study in the offices of the Cook County treasurer, assessor, and recorder of deeds.”  [February 27, 1977]  Some of the more interesting findings are summarized as the article unfolds.  There are approximately 200 owners of Loop property which has an estimated value of $1.1 billion (over $4.5 billion in 2020 dollars).  One-fifth of Loop property is tax-exempt even though commercial properties such as Inland Steel Company and First Federal Savings and Loan Association have built tall buildings on such leased tax-exempt property.  The single biggest property within the Loop is the First National Bank.  The Chicago Board of Education and Northwestern University are the principal owners of tax-exempt Loop property with the Board of Education leasing out an entire block bounded by State, Madison, Dearborn, and Monroe Streets.  Northwestern owns two properties leased as parking garages and half the land under the Continental Bank.  About two-thirds of the tax-exempt land in the Loop is occupied by various governmental units, as well as by religious, education, and charitable organizations.  That land, if taxed, would produce $3.3 million a year in revenue (close to $13 million in 2020 dollars).  Principal owners of multiple properties in the Loop are Tishman Realty and Construction Company and Investment Properties Associates of New York, the two firms holding a combined total of ten buildings worth $133 million (about $566 million in 2020 dollars).  The Massachusetts Institute of Technology owns office buildings at 18 South Michigan Avenue and 347 West Erie Street, the properties willed to the university in 1970 by Catherine Dexter McCormick, the daughter-in-law of Cyrus McCormick.  The university pays full taxes on the buildings.  The Tribune study reveals that all of the major buildings in the Loop are up to date in their tax payments with one exception.  That is the Lytton Building at Jackson Boulevard and State Street, which is in receivership.  The Inland Steel building, pictured above, a marvel of mid-century modern architectural design, was built on tax-exempt land owned by the Chicago Board of Education. 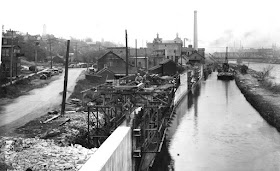 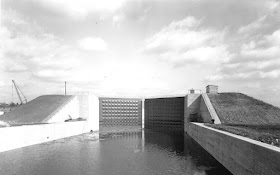 February 27, 1933 – The Sea King, a small boat owned by the Chicago Daily Tribune, takes the first passengers and cargo over the newly opened Illinois waterway, completing the first continuous passage of the 60-mile channel between Utica and Joliet “on the lakes to gulf route, a dream of generations which now is actually realized.” [Chicago Daily Tribune, February 27, 1933]  The Sea King ties up at Ottawa for the night, and a large crowd gathers at an athletic field on the river front as “Salutes were fired from the high school lawn, and a band furnished music.”  The lakes-to-gulf route will formally be opened on June 15 and will extend 3,300 miles by water from the Gulf of Mexico to the Gulf of St. Lawrence.  The Sea King takes on its cargo at the Michigan Avenue bridge near Tribune tower and begins its trip at 3:00 p.m. on February 26.  The ship sails six miles through the Chicago River system, entering the Sanitary and Ship Canal and steaming 28 miles to the lock at Lockport where there is a 41-foot fall into the Des Plaines River, the beginning of the new Illinois waterway, through which the ship sails in three-and-a-half hours.  In order to make navigation possible through Joliet, five new bascule bridges were needed, three of which have already been completed.  Two miles to the west of Joliet the Brandon Road lock and dam is one of the most impressive projects on the waterway.  The dam, which cost $3.5 million, is 1,350 feet long and during periods of heavy rains or snow melt it can allow a maximum of 35,000 cubic feet of water per second to pass over it.  Lake Joliet, which extends close to four miles below the Brandon Road lock, narrows from there to Dresden Heights where there is another lock and dam, about 56 miles from Tribune Tower.  The lock at Dresden, which extends 642 feet across the river, was the last project on the waterway to be completed, costing $2,365,000. At Morris the first merchandise from Chicago is delivered to C. H. Hinds, the freight consisting of “packages of hosiery and dry goods from Marshall Field and Co. and Carson Pirie Scott and Co.”  At Morris the Sea King ties up to the Colonel Sultan, a ship that will sail in March into the Chicago River, becoming the first boat to make a continuous upward passage of the waterway.  The photos above show the Brandon Road lock under construction as well as what it looked like when it was brand new. 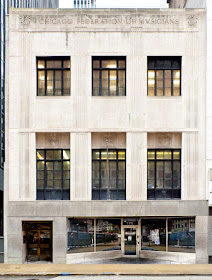 February 27, 1933 – The new home of the Chicago Federation of Musicians is opened for business at 175 West Washington Street as several hundred invited guests look over the new digs.  During the ceremonies James C. Petrillo, the president of the federation, is presented with a diamond studded commissioner’s star.  During the evening the guests dance to the music of Wayne King, Ben Bernie, Charles Agnew and Fritz Miller and their orchestras.  Architect Max Dunning designed the building in a modest Art Deco design, notable for the panels above the second story windows that reference the building’s purposes.  The panels have representations of a flute player and harp player and a figure in the middle panel surrounded by musical instruments. 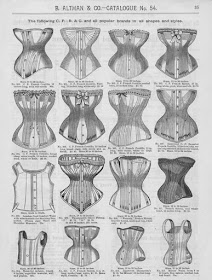 February 27, 1925 – Item in the Chicago Daily Tribune on this date … “Because ‘they aren’t wearing ‘em any more,’ more than 1,000 corsets, the stays sterilized and refurbished by down-and-outers, lie moldering in the Monroe street warehouse of the Christian Industrial league.  They are gifts of friends of the institution.  ‘Placed end on end, says George A. Kilbey, manager of the league, ‘there are enough corsets in that one spot to carpet Michigan avenue from the link bridge to the Illinois Central building [about two miles].  They could wrap up the city hall.  In fact, there is enough steel in those stays to armor a light battle cruiser.” 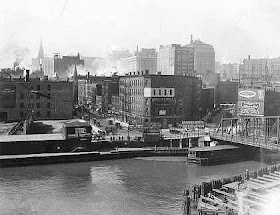 Chicago Old and New at 2:30 AM No comments:
Share
‹
›
Home
View web version