May 19, 1989 – The Chicago Tribune reports that the city’s legal office has recommended that the city sign off on a $1.5 million out-of-court settlement, resolving a suit filed by the family of a cabdriver who was killed after he was crushed in his cab by the Kinzie Street bridge.  The accident occurred on April 14, 1987 when Ju Hawn Bang’s cab was trapped on the bridge while it was raised and lowered.  Witnesses said that Bang was driving his cab west across the bridge when warning bells sounded and gates were lowered, trapping the cab, with its rear wheels on the bridge and its front wheels on the street, as the bridge began to rise.  The car was flipped onto its roof with its hood facing over the water as a barge and tugboat passed beneath the bridge.  The bridge tender than lowered the bridge, crushing the cab.  Two passengers inside the cab barely made their escape before the bridge came down on top of it.  It was determined that the bridge tender was legally drunk at the time of the accident. May 19, 1934 – A ferocious fire burns for more than four hours at the Union Stockyards on the city’s South Side.  Before it is brought under control it destroys eight city blocks – approximately 80 acres – and 1,200 people are injured.  Hundreds more lose their homes.  Nearly all of the buildings in an area bounded by Halsted, Emerald, Forty-First, and Forty-Second Street are destroyed, along with about a quarter of the pens and barns in the stockyards.  Over 2,200 firemen battle the flames in a fire that Mayor Edward Kelly says is “the worst fire Chicago has known since the great one of 1871.”  [Chicago Daily Tribune, May 20, 1934].  Although firemen manage to save the great packing concern of Armour and Co., many landmarks in the stockyards are destroyed, including the International Amphitheater, the Stockyards Inn, the Saddle and Sirloin Club, Drovers National Bank, and the Livestock National Bank.  Six fire department pumpers are destroyed as they sit attached to hydrants.  It is believed that a carelessly tossed match or cigarette began the blaze, which quickly burned out of control due to winds of up to 60 miles-per-hour and a lack of rain during the spring.

May 19, 1908 – A plaster of paris model goes on display at the Art Institute of Chicago, showing landscape architect Frderick Law Olmsted’s vision for Grant Park. The Chicago Daily Tribune reports rapturously, “From the sooty network of railroad tracks and the malodorous wastes of mud and garbage, there will rise, according to the model, a magnificent plaza, beautiful buildings, broad meadows, great trees, swimming pools, boat houses, brilliant flower gardens, impressive boulevards and winding drives.  Above all, Chicago will regain its heritage, the lake, which will be bordered by high wooded banks, surmounted by promenades and drives.”  [Chicago Daily Tribune, May 20, 1908] The focal point of the plan will be the Field Columbian Museum, situated in the center of the park on Michigan Avenue, dwarfing the Art Institute’s building just to the north.  The plan locates the Crerar library to the south of the Field Museum, balancing the Art Institute to the north.  Other amenities include a gymnasium, natatorium, “a monster playground,” boat houses, restaurants, rest houses and “airy piazzas.”  The chairman of the South Park Commissioners, Henry G. Foreman, says of the plan, “Chicago has become so used to a front yard filled with smoke, and cinders, and railroad tracks, and ugly freight cars, and mud, and refuse, that any plan to change it seems to many people a mere dream.  It is hard to wake people up to the fact that we not only have great opportunities, but that we are making the most of them, and soon will have adjoining the loop a great and beautiful park.” May 19, 1893 -- The battle for the city’s lakefront, which continues to this day, commences as a judge issues a restraining order that prevents the city from leasing any part of the Lake-Front Park “to a circus or to any party or parties for any purpose except as a public park.” [Chicago Daily Tribune, May 20, 1893] Although the judge says that he will allow the circus to continue in the park until the end of its run on June 5, he orders that all other parties leasing space in the park must get the heck out. Elbridge Haney, attorney for Montgomery Ward and Co., says, “The city authorities have rented the property at ridiculously low figures to circuses and other shows. This year they have rented it for two weeks for $5,000. Then the city has for years maintained a yard for storing paving blocks, tar wagons, stones, old lumber, and all sorts of rubbish, and lately it proposes to add another objectionable building for stabling sixty garbage horses and wagons. Last Monday it commenced the erection of such a building, and I compelled the city to quit work as soon as I discovered it.” The battle over the Lucas Museum of Narrative Arts, pictured above, a plan that has now been abandoned, is just one more episode in a 125-year narrative about how best to use the city's lakefront. 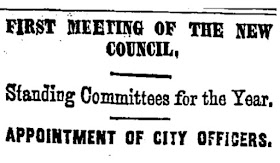 May 19, 1862 –The first regular meeting of the newly elected Common Council is held, and the alderman get off to a big start.  Alderman Hoyt presents an ordinance regulating cows … “providing that no person should drive cows in herds to pasture, who lives east of Clark street on any street west of Clark street, and vice versa.”  [Chicago Tribune, May 20, 1862] From the looks of it this burg is becoming civilized, and Clark Street seems to be turning into a pretty big deal.
Chicago Old and New at 2:30 AM
Share